The question and answer session following the recent reading by Alice Oswald at the Bristol Poetry Institute, during which she read from memory for the best part of an hour, provided inspiration for a recent Friday morning poetry group homework assignment.

When asked how much the poem is shaped by the effort of memorising it, Oswald answered that her memory is her editor, adding that if she finds she can’t memorise a section, she abandons it.

Colin’s challenge, therefore, was this:

Write a poem and memorise it as you go. As you go through the process of memorising your poem, listen to yourselves speaking the poem and assess how it feels. If the rhythm feels wrong, change it; if there’s a word or phrase or verse that doesn’t feel quite right, change it. If there’s a part of the poem you’re having trouble memorising, cut that part and write something you can memorise.

When you bring your poem to the group, make copies for everyone as usual … but you’re going to be speaking the poem by heart, without benefit or distraction of a written copy. If you do forget a word or a line on the day, be prepared to improvise a line – don’t panic, get hung up, stop or give up. Don’t be nervous or intimidated; it’s only a workshop with supportive friends.

It’s the process itself that’s important. It’s something to try.

Your poem must be at least 12 lines long.

Initially, I felt this assignment was going to be easy. Although I’ve never had the self-assurance to stand up and speak my poems from memory, I read them aloud so often in their almost-finished state that I do effectively learn them by heart, and I felt sure I could handle the assignment. The reality, however, was different. What I hadn’t taken into account was that I would be memorising from a far earlier point in the poem’s creation, and because it was still in a state of flux, I was effectively commiting consecutive drafts to memory. Again and again, I would fall back on something I’d changed at a much earlier stage and change it back, or stumble over the perfect combination of words I’d finally settled on, only to discover that according to my new editor, they weren’t that successful after all. But what I was left with was defnitely different from what would have been the finished poem, had I started reading it aloud at a later stage.

The other drawback I discovered is that the memory – or rather, the sneaky, hooded-and-cloaked brain behind it – tends to be an unreliable editor. Several times mine would substitute what I’d written for something rather more predictable and dull. Cliché really does trip more readily to the tongue.

On the day, before the scrutiny of my suddenly-rather-more-scary-than-usual peers, I managed to dredge up my poem with only one minor stumble, which was pleasing, but I don’t think I’ll be in a hurry to do it again, and I certainly won’t be rising to the challenge of doing a public reading from memory. Alice Oswald is a consummate poet and performer, with a background in drama, and she has acquired specific skills over years to pull off her prodigious feats. I find that remembering to assume my poetry reading persona (which is slightly different from the poetry-writing me), and to drop my voice a little, and engage with the audience, and make it sound as if I’m talking with them rather than reading at them, is quite enough to hold in my head at once, so I’ll definitely still be turning up at readings, clutching my file of poems to my ever so slightly nervously beating heart. 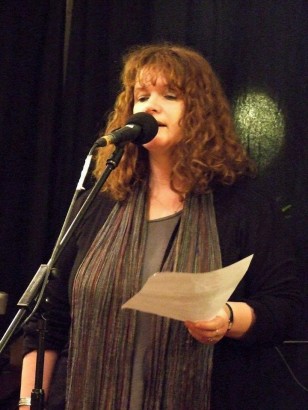